In 1902, the miniature portrait painter Gerald S Hayward built ‘The Willows” as his own personal little piece of country luxury on the beautiful south shore of Rice Lake near Peterborough. Hayward was one of Canada’s most prolific and finest miniature portrait painters, his career took him around the world painting royalty and other persons of interest. He left his mark on “The Willows’ by carving a moose head on the wood beam by the fireplace!

In recent years, the previous owners were taken by the Turret Room, the stained-glass windows and the magnificent Mission-style architectural features that they turned The Willows into the Victoria Inn. The Inn held many weddings and celebration events. In 2021, Victoria Inn name was changed and is now known as Victoria Wellness. A Residential Rehabilitation facility specializing in mental health care with a connection to the surrounding area. 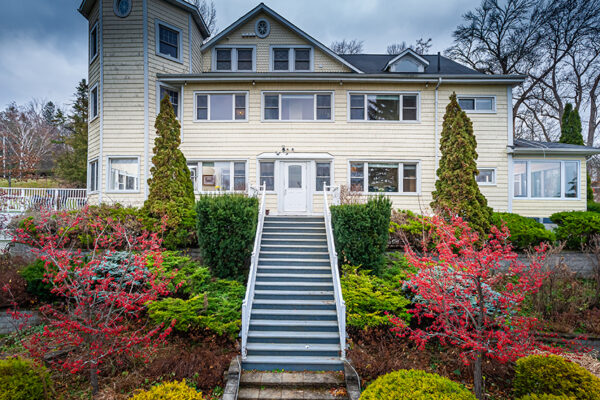 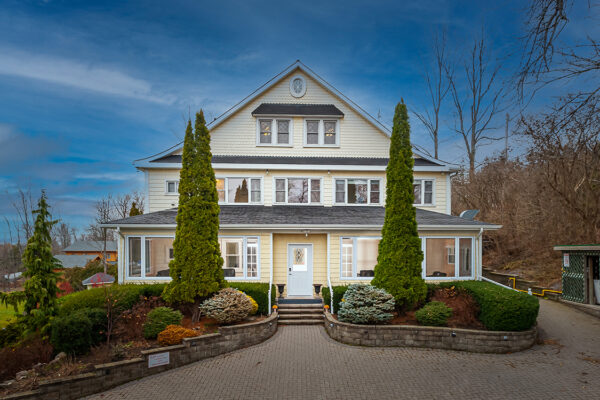 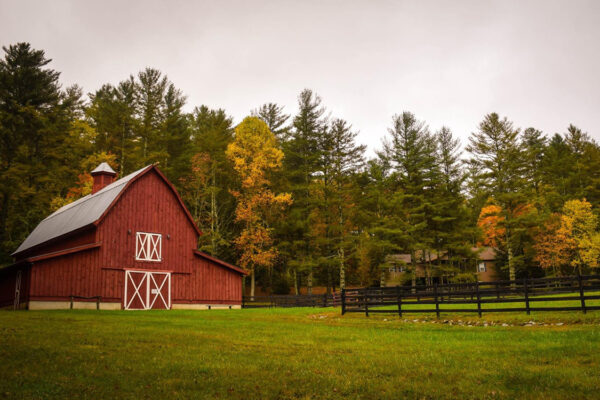 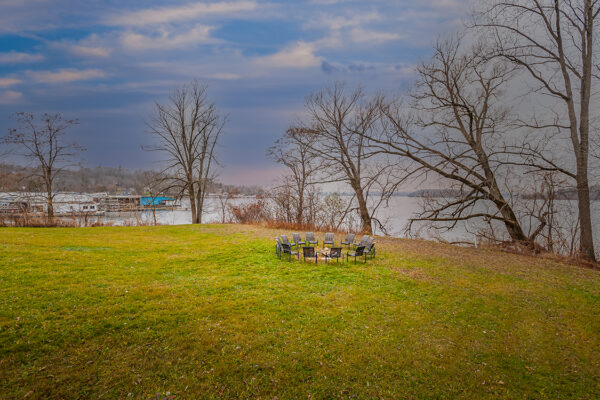 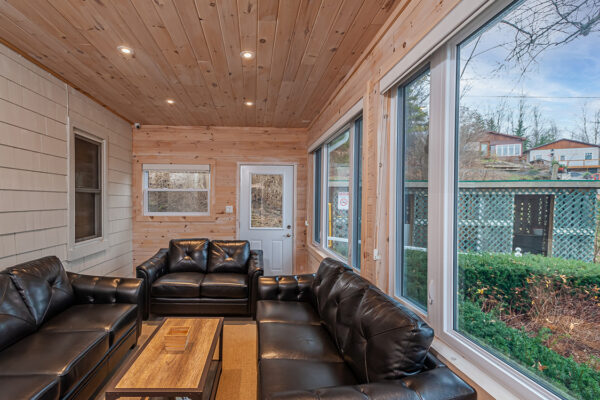 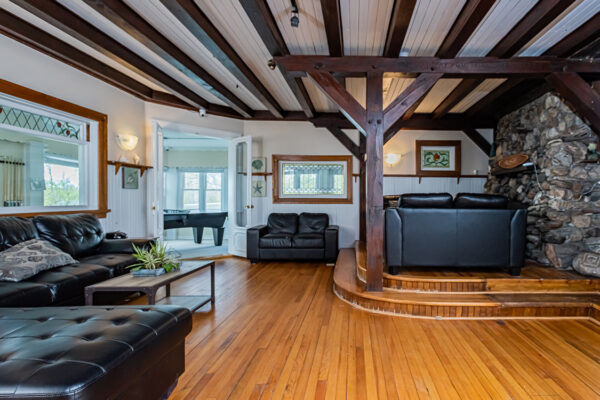 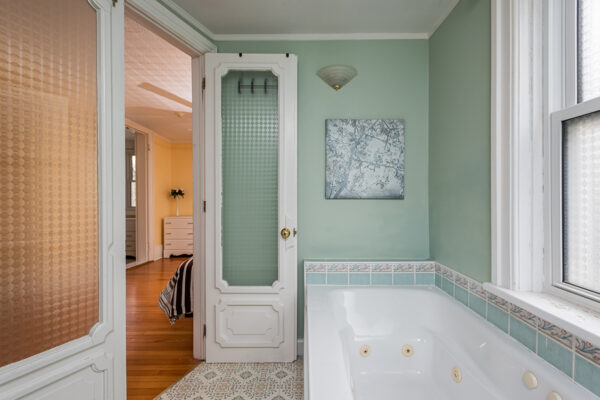 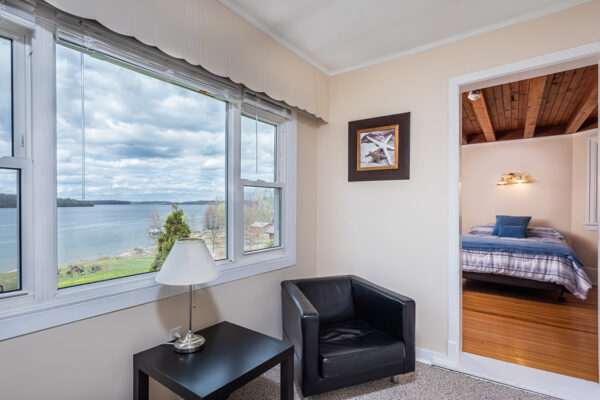 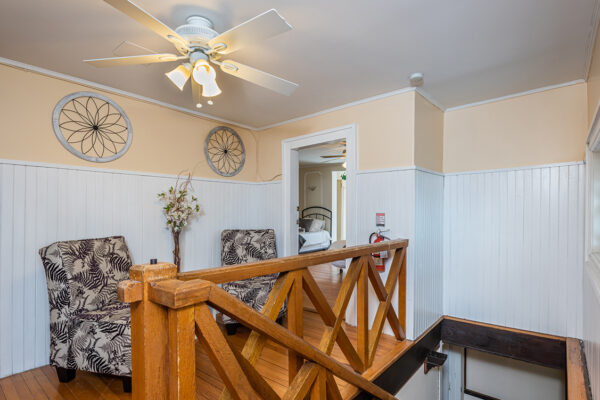 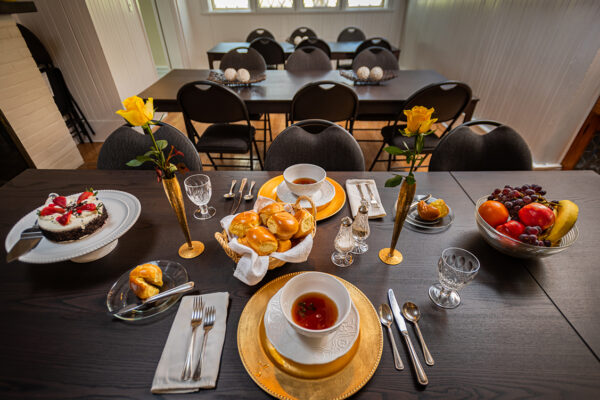 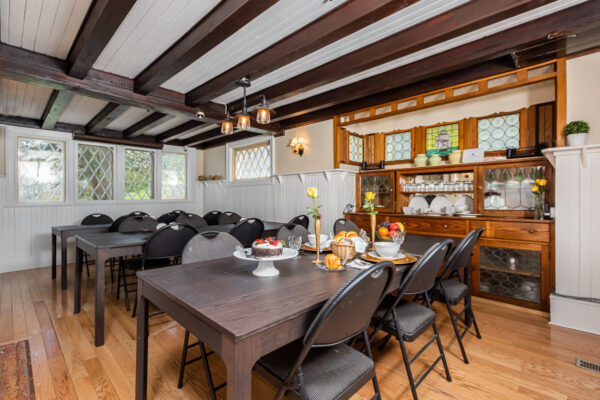 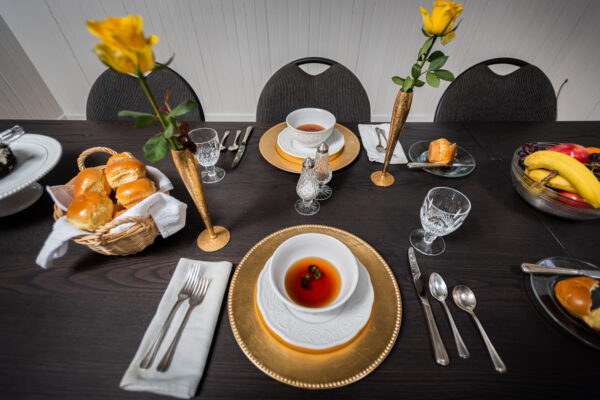 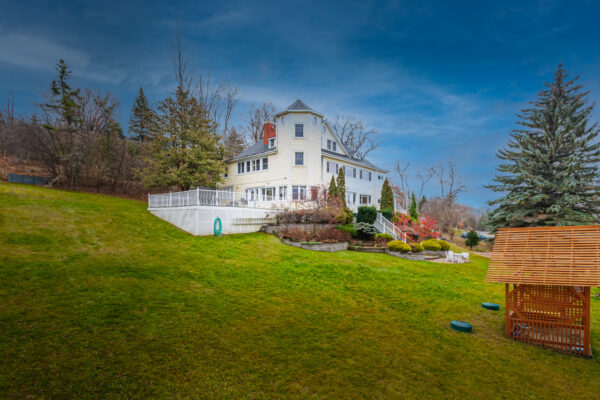 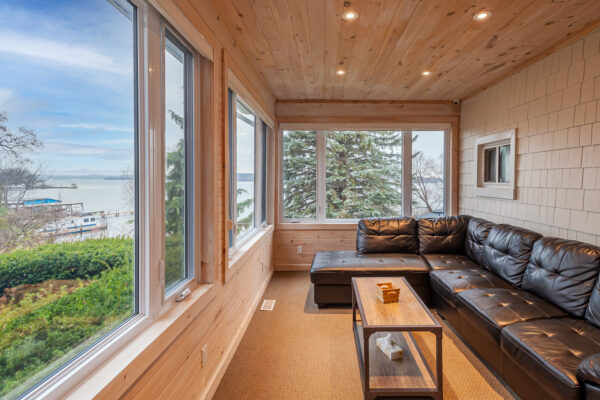 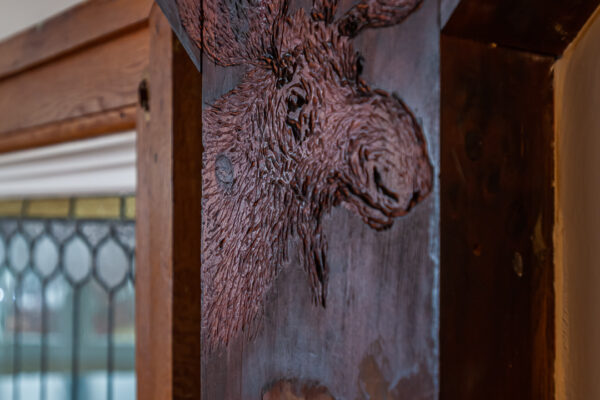 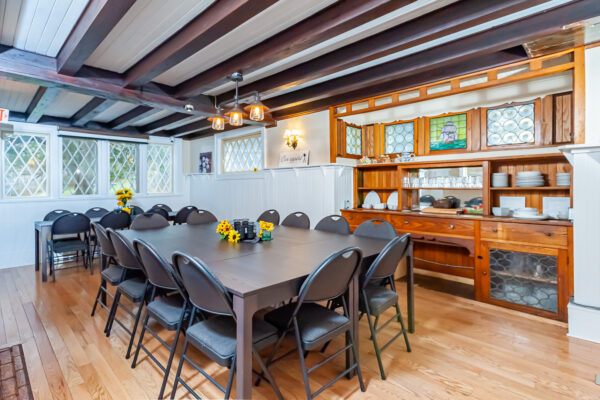 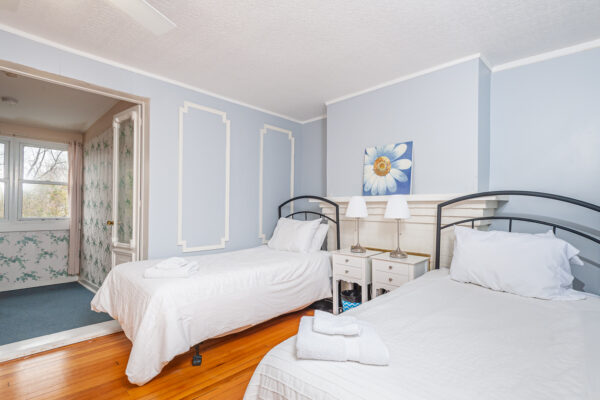 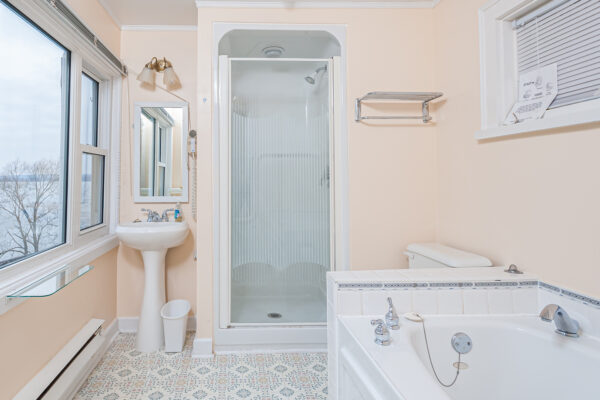 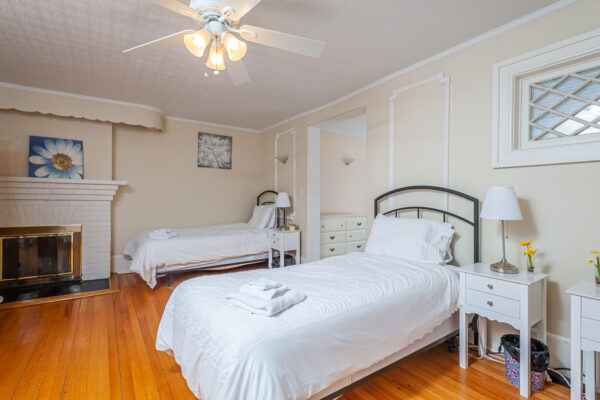 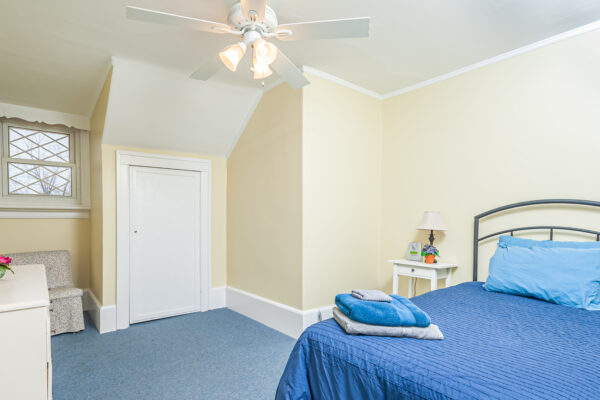 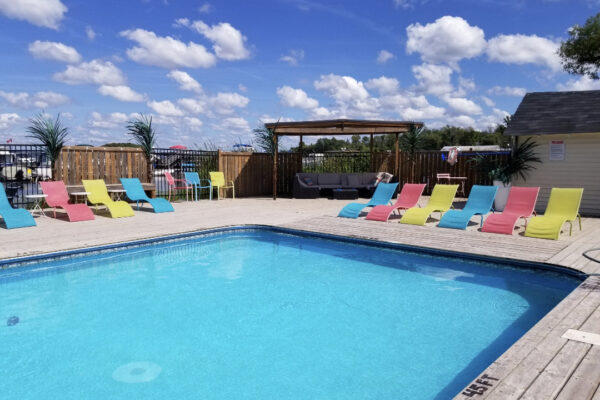 History of the Area

By the 1830s Gore’s Landing was an important link on the pioneer trail to the northern townships. In mid-century “Mr. Gore’s Landing” was a busy, rapidly developing settlement that attracted boaters, travellers and the new leisure class to its picturesque shores. Many writers and artists have called the village home, leaving behind rare early records.

Steam-boating on Rice Lake started in 1832 with the launching of the ferry, Pemedash. It was not until the 1860s, however, that the great era of steam-boating began in earnest… Per historians “steamboats did a brisk business carrying passengers, excursion parties and picnics, when nearly every club, society and Sunday School held an annual boat excursion.” (Gore’s Landing and the Rice Lake Plains) The annual Rice Lake Regatta also ran from 1846 for almost 100 years, during the glory years of Gore’s Landing.

Two new hotels followed: the Harris Inn in 1846 and William Weller’s Rice Lake House or Gabetis Inn (which still stands) in 1849. Both catered to the leisure class and to those travelling from Cobourg to Peterborough in Weller’s daily six-horse stagecoach to Gore’s Landing, then across Rice Lake on his steamboat. William Weller was also the first mayor of Cobourg. The Weller-Gabetis Inn closed in 1864 and remained unoccupied until 1867 when it became home for four years to Archibald Lampman, the well-known nature poet, and his family.

The White House, Gores Landing, purchased in 2017 by a descendant of the original builder

The private residence referred to in this directory notice is known as The White House and is still one of Gore’s Landing’s most distinctive buildings. Alfred Harris built the imposing villa as his residence and guest house for retired gentlemen.

The original St. George’s Church was built in 1847 on the highest hill in the hamlet. Catharine Parr Traill wrote about the first service on January 1, 1848. Thomas Gore, the artist Gerald Hayward and other notables are buried in its cemetery.

Beyond repair, the wooden church was demolished in 1908 and the current church, “one of the loveliest parish churches in Canada,” was completed in 1909.

A locomotive on the Blairton Extension of the Cobourg and Peterborough Railway circa 1870.

The Cobourg and Peterborough Railway (C&PRy) was one of the first railway lines to be built in Central Ontario, Canada. The line was initially considered in 1831 as a way to bring the products from the burgeoning area around Peterborough to markets on Lake through the port in the town of Cobourg. A series of problems, including the Upper Canada Rebellion and the Panic of 1837, meant that construction did not begin until 1853, reaching Peterborough in 1854.

The line ran directly over Rice Lake on what was then the largest trestle bridge in the world. However, it was not the strongest, and the bridge was shifted due to ice only a few days after opening. Problems with ice continued to be a serious concern throughout the railway’s history. A series of companies took over operations of the C&PRy, including a lease to the shareholders of the Port Hope, Lindsay & Beaverton Railway, who ran a competing line only a few miles away. The new operators surreptitiously sabotaged the bridge, causing it to collapse in 1861. Remnants of the bridge can be seen on a boat ride of Rice Lake.